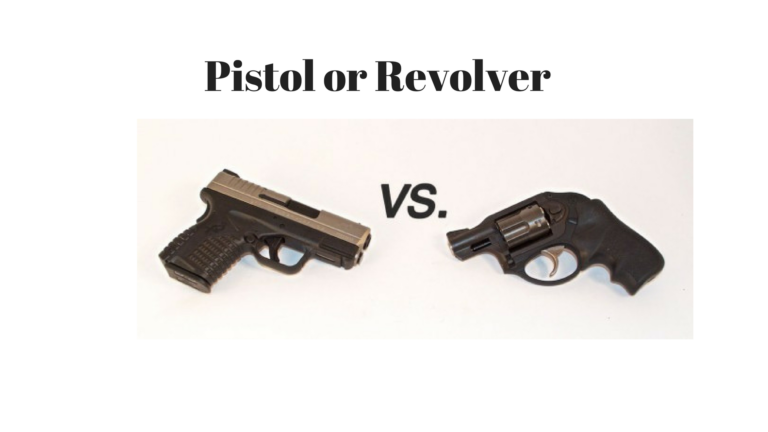 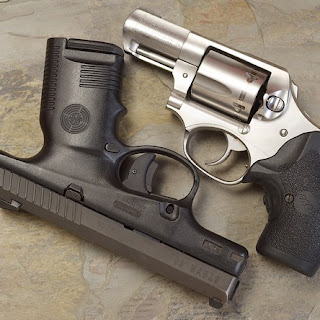 For the prepper as for the sports shooter wanting to acquire a handgun, the eternal question of the choice between a pistol vs a revolver arises.

Beyond the personal tastes and operating principles related to the weapons themselves, there are also tactical differences that can guide the choice of the end user.

What is the best weapon between a pistol and a revolver? This famous question, which constantly gives me the desire to wash my ears with barbed wire covered with harissa, I will finally be able to answer.

To begin, a little word for the novices in the matter concerning the difference between a pistol and a revolver.

A revolver is a weapon that has a barrel, a pistol a weapon using a modular charger and using gun ammunition … The definition has taken a hell of a long shot with technological advances but the debate is not there , So to make simple one will stay on this definition. 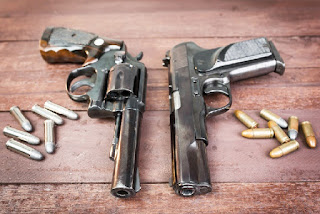 Well, let’s get back to the subject, what is the best between a revolver and a pistol?

If I ask you what you think is the best weapon between a shotgun and a precision shotgun, that must be much clearer to you. In fact, none is better than the other, its utility and situation will be the factors that will make you choose one or the other,

For a handgun it’s the same, a shooter must first know What he will want to do before choosing it.

Psychologically, when you start shooting and want to buy a weapon for defense without knowing too much about it, you will often choose the revolver for two reasons. First, terminal ballistics of ammunition. I’m not talking about firepower, because that term does not take into account ”

When one walks a little on the shooting forums or in the stands, one quickly notices a war between the defenders of the pistols and those of the revolver. For the latter, these two arguments are always put forward. 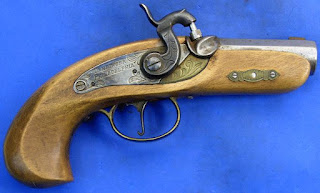 The first handguns were the black powder guns … Still used today, either for competitions or for the collection. If one has a big budget shortfall, some of these weapons may still be worthy of interest, such as the famous Philadelphia Derringer. For the rest, no interest.

The revolvers that then replaced them were an incredible development for the time, and despite some shortcomings, will remain without competitors for decades.
1836 for the first revolver, end of the 19th for the first semi automatic pistols. 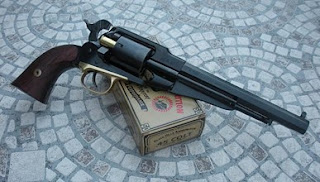 The first pistols appeared, with their lot of defects …

But were still well received for their qualities …

Good … The biggest blow of pub of the pistol, which gave it a great popularity, comes from its use in the assassination that triggered the First World War. Even if it was already planned and prepared for years, it was the spark that allowed to start everything. 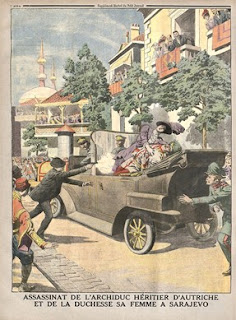 In a hundred years, with the technological evolution, the defects of the pistols were withdrawn, even looking for the small details. The revolver, for its part, was only slightly reworked, except to adapt it to different calibers, more and more powerful, even leading to irreversible physical trauma.

For the new generation revolvers, the design was modified, as on the famous Rhino, where the barrel was placed under the barrel, to place it in the alignment of the arm and thus reduce the gun reading by making the recoil linear Point of support. But no TRUE progress in the field; That’s fine, but we can not really talk about real evolution. 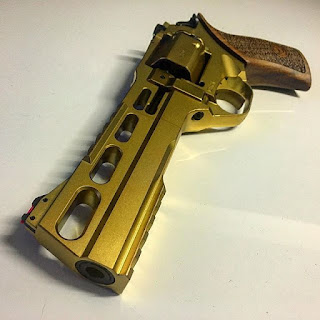 The Rhino from Chiappa and its barrel placed under the barrel

In this great war between the possessors of arms, the only one who succeeded in convincing me of the purchase of a revolver is a survivor.

Survivalists see the purchase of a weapon for use up to several decades, and sometimes with a very precarious storage, and here I mean to foresee the worst by burying its weapon in a box at the bottom of the garden. In a case such as this, the revolver, which is made up of large parts, easy to repair or even to manufacture, could be a much better choice.

A pistol will be much better for combat, for a very quick use, but the revolver will promise a longer life, without having to pay special attention.

The operating modes of the turntables

The guns have three different modes of operation, each of which will determine the action of the trigger tail on the firing pin, and therefore will be taken into account in its use. Use in combat of course, but also in storage, chest or purse. The choice of a particular mode of operation will depend on the use, so one must have at least a basic knowledge to know which one will suit you. 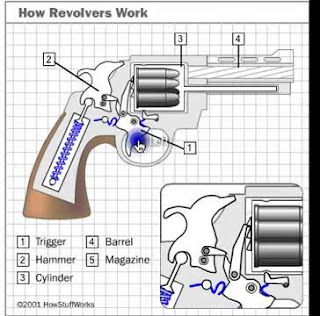 The principle of dual action

The double action : By pressing the trigger tail, the hammer will gradually retreat until it reaches the stall point and then fall on the firing pin. The defect is the weight on the trigger tail, really very high, which forces to manually reset each time if we want to reduce it. The big advantage is that the hammer never remains armed, So you can keep a piece of ammunition in the chamber, without risking unintentional percussion. The weight of the trigger tail then serves as a safety feature.

The simple action : Here, the action on the trigger tail will only unhook the hammer which must first be manually armed, either by pulling the hammer back, or by cocking the breech.Attention to new generation dual action pistols, such as the P99 DAO (double action only). They do not have a hammer, so you will have to bear the weight of the trigger with each shot, which can become very problematic for fast shooting.

It is the operating system of the very first semi automatic pistols. Their big fault is the fact that the hammer can let go a little when he wants; In this case, if a munition is in the chamber, the consequences can be fatal. To defend himself with this weapon, 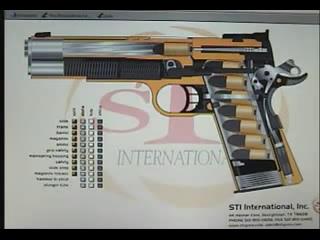 The principle of simple action

The Glock system, which has no Hammer, like most new generation weapons, consists of keeping the firing pin halfway through the race once armed. If he let go, he will not have enough momentum to strike, And being almost at the edge of the stall, the weight of the trigger is rather low. This system renders ultra famous this weapon, with the success that is known to him (that, plus all the advantages of a Glock).The DASA (double action single action) : It is a combination of the two, removing the defect of the double action by leaving the hammer backwards each time, and removing that of the simple action by acting on the hammer via the trigger tail. This makes it possible to leave a munition in the chamber continuously, without risking an unintended percussion AND a slight weight once the first cartridge is pulled.
Personally, this is the system I prefer, and I went to buy a P99 in DASA, before succumbing to the Glock system, and to adopt a Glock 17. 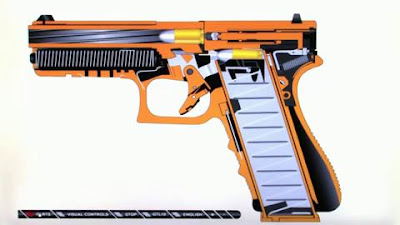 The principle of DASA

The standard action for old weapons, such as black powder weapons.For revolvers, it is much simpler, there are only two systems:

Then the double action , which is exactly the same principle as for the pistol … Basically, for the revolvers new generation, there is only double action.

The advantages of the gun: Lightweight, reliable when it is a minimal maintenance, very fast reloading, little recoil, standard charger of approximately 17 cartridges (29 + 1 maximum for a category B), inexpensive weapon and ammunition … Limited defects: Less terminal ballistics, less reliable over time, smaller pieces more fragile, and less easy to repair, especially if one has to make one’s own parts.

In this analysis, I removed the Desert Eagle, being a pistol using revolver ammunition, as it is a weapon apart. It is ultimately a weapon made for the army, but can only be used as a weapon of leisure, because obviously no army or police force buys a 2.9kg handgun. It is also one of the weapons that neophytes want to buy when they start shooting, but try to resell quickly because of its basic price, the price of ammunition, A disproportionate setback for a weapon of antipersonnel defense … Because yes, if I leave to stop a truck, I take a shotgun, not a pistol. This weapon is intended to make antimaterial in a format intended for anti-personnel, and therefore does neither properly. 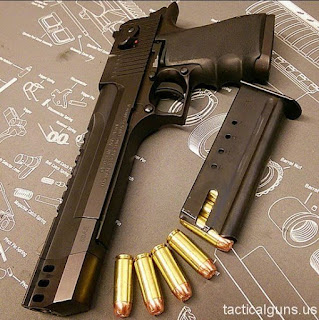 The Desert Eagle, the monster of handguns

When I talk about special effects, I’m talking about everything a munition can do, in addition to killing. It goes through the tracer bullets, CS gas, rocket fire cartridge … But mostly, wreath effects, explosive bullets, incendiary bullets, etc.For the choice of a handgun, you understand that I am very pistol, but it is necessary to take into account also the special effects, where there, on the other hand, the revolver can make very strong. 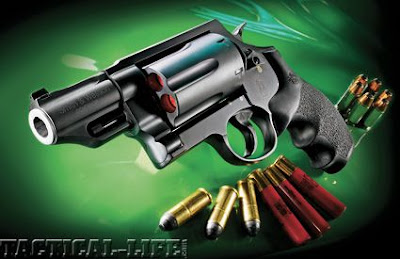 If one day I had to take a revolver, it would be the Smith & Wesson Governor; A handgun pulling from the 410 cartridge in addition to standard balls. The idea is just great.
A quick word about handguns …A revolver pulling from the bullet, buckshot, pellets … Or anything that you can put in a closed cartridge like that (coarse salt, rubber balls, bacon, etc.). The lead of 410 generally lacks power, and the opinions on its effectiveness have been rather average (magazine Targets No. 512), but here we are on a steel barrel, designed to fire 45ACP and Governor. Unlike a blank replica, reloading the ammo can make it more than compelling for personal defense.

They are considered by all professionals to be THE EXISTING DEFENSE PIRE ARMS, and it is true that they have many defects:

Having found no defender of these weapons, when they have a certain potential, I must say a word about them. A few years ago, these weapons were classified in 8th category, the equivalent today of the category D. Anyone could buy one, on the simple condition of being 18 years, for a price to the (About 900 F), and it is therefore rather easy to find today. 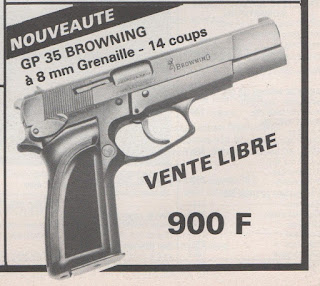 For ammunition, the pistols can not be acquired without a B license and a proof of the weapon. On the other hand, there are blank cartridges for these weapons, which a survivor who is a little handyman will have no difficulty in modifying.

For the revolver ammunition, it is generally the 9mm Flobert, more powerful ammunition with a much easier purchase, since it is used in garden rifles in category D1, and the modification is even easier than that Of the gun.

Politically correct word of the day, do not confuse “reload” a munition, and “modify” a munition. Recharge allows you to modify the firepower of a cartridge, but without changing its configuration, and it is therefore perfectly legal. The modification makes the munition something that is not supposed to do at the base (like spitting flames or pulling coarse salt) and there, it is forbidden …