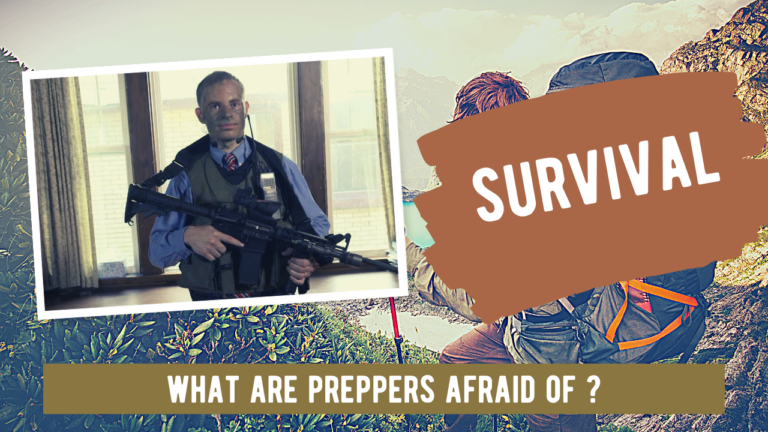 Preppers are individuals who are preparing for a potential disaster or emergency. Prepping is a way of life: it involves stockpiling resources, building an emergency plan and honing a variety of skills to help you and your family survive unforeseen dangers. But why are people so afraid? What are preppers afraid of?

Table of Content show
What are Preppers Afraid of ?
1. Natural Disasters
2. Economic Collapse
3. Loss of Freedom
4. Loss of Jobs
5. Depletion of Resources

What are Preppers Afraid of ?

In this blog post, we’ll explore the prepping mindset and the fear it’s based on. We’ll look at the range of disasters that preppers train for, as well as the psychological impacts of being in a heightened state of preparedness. We’ll also discuss how to deal with any fears you may have when you are in the prepping mindset. Prepping is an important part of being prepared, and understanding what preppers are afraid of can help you be better equipped to face disasters.

One of the biggest fears for preppers is the possibility of a natural disaster. While some of these disasters are unpredictable and impossible to prepare for, many can be anticipated with emergency plans and preparations. Earthquakes, floods, hurricanes, blizzards, tornadoes, and landslides are all natural disasters that preppers must consider. Preppers must be aware of the potential risks associated with each of these disasters and must plan accordingly, stocking emergency supplies and creating evacuation plans. With the right preparations, preppers can make it through any natural disaster.

Preppers are also afraid of an economic collapse. This fear is based on the idea that a financial crisis could lead to the collapse of the global economy. This could mean catastrophic job losses, a decrease in the value of currency, hyperinflation, and the rapid devaluation of assets. Preppers often fear that in the event of an economic collapse, they won’t be able to access basic necessities like food, water, and shelter. They also fear that an economic collapse could lead to civil unrest and violence. As a result, preppers often stock up on emergency supplies, such as food, water, and medical supplies, and prepare for the possibility of living off the grid.

Preppers fear a loss of freedom more than anything else. They fear a loss of the right to choose their own lifestyle, to think and speak freely, and to make decisions for themselves. They fear the government, or organizations like the UN, taking away their liberties and rights. Preppers worry about a future in which their personal freedom is not respected and their ability to make decisions for themselves is taken away. They worry about oppressive regimes and laws that will strip away their rights and make it impossible for them to live as they choose. They fear living in a world where their opinions and beliefs are not accepted and their voice is not heard.

Preppers are afraid of losing their jobs. Job loss can lead to an inability to buy food, pay for medical bills, or put a roof over one’s head. It can also lead to a loss of social connections, as employment often serves as a stabilizing force in a person’s life. For preppers, job loss can create a loss of confidence and a sense of worthlessness. It can also leave them feeling like they’re unable to provide for their loved ones and unable to put into action the measures they’ve taken to prepare for a disaster.

Preppers are often concerned about the depletion of resources around the world. This fear is based on the fact that the Earth’s population is growing rapidly and the consumption of natural resources is increasing. Preppers fear that as the population increases, so will the demand for resources, leading to a shortage of essential resources such as food, water, and fuel. This would lead to a collapse of the economy and further disruption of the global power balance. As a result, preppers strive to be prepared for such a scenario by stockpiling resources, learning sustainable living practices, and developing alternative sources of energy.

In conclusion, preppers fear a wide range of scenarios from natural disasters to economic collapse and political unrest. While some prepping activities may seem extreme, they serve as a way to help individuals be better prepared to handle any situation. Preppers are also proactive in their beliefs and often practice what they preach in order to best protect themselves and their families. Preppers are not to be feared, but rather respected for their commitment and dedication to being prepared for any situation.