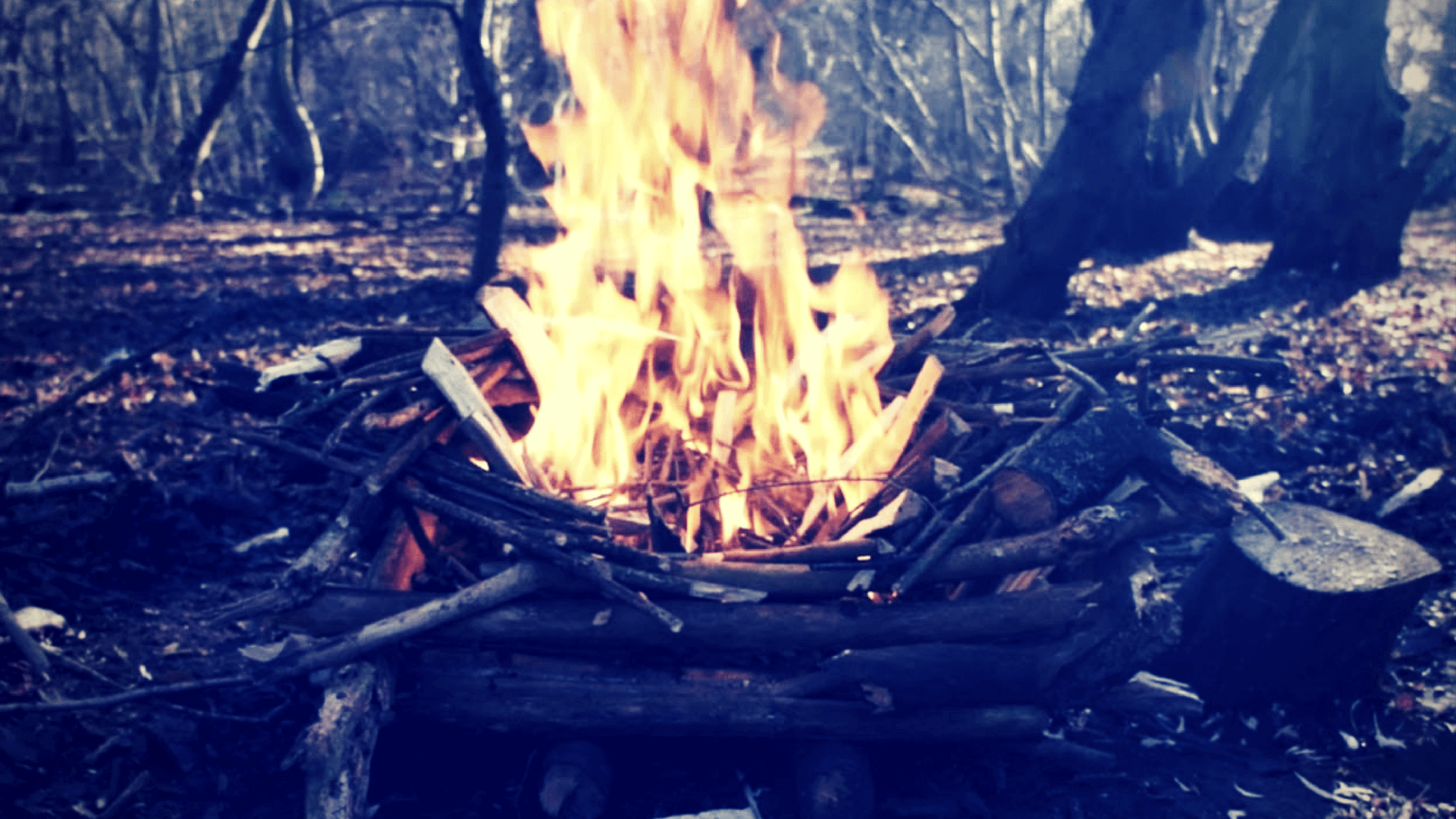 There are many techniques of fire production . Traditional ignition systems fall into two main categories:

The two most popular modern techniques, the lighter and the matches , use precisely the same principles.

Fire, more properly called combustion, is a chemical reaction of oxidation emitting heat ( exothermic ). The flame (gas in which the combustion takes place), which is commonly generated, emits light because of its high temperature ( incandescence ) and electronic recombination ( luminescence ). The fire requires three factors: two chemical compounds (a fuel and an oxidizer ) and an energy supply (activation energy), the so-called fire triangle . The fuels can be very varied, they are generally based on carbon ( wood , hydrocarbon …). The oxidizer is generally the oxygen present in the air . Energy must be supplied from a third source at the beginning of the reaction. The reaction being exothermic, if it is sufficiently intense, it can self-supply itself with energy.

The question of the date when humans have mastered the use of fire is still being discussed within the scientific community. Some very old sites (Chesowanja, Gadeb, Koobi Fora in East Africa , Aldene , L’Escale in France) provided direct (charcoal) or indirect (burnt stones, burnt clay) Structure does not allow the exclusion of any natural fires.

Some authors believe that initially human groups would simply have used the fire taken from fires caused by lightning or volcanic eruptions. The ability to truly produce fire would be more recent. This vision is extremely difficult to argue: it is certainly consistent with some ancient accounts, such as the De Rerum Natura of Lucretius , or prehistoric fictions such as La Guerre du feu . For C. Perlès, this debate is of little interest, partly because the existence of these two phases is indemonstrable on the basis of archaeological data, and secondly because the most important step remains the passage of Non-use in the use of fire, whether produced or not 1 . The control of fire is indeed one of the characteristics that distinguish the human lineage from the rest of the animal world. Fear of fire in animals must however be qualified to the extent that some raptors and cheetahs seem to take advantage of bushfires that fold their prey 2 .

Some methods of fire production probably date back to the Lower Palaeolithic , although direct archaeological evidence does not date back more than 9,000 years BP for friction methods (Guitarrero cave in Peru).

The archaeological examples of percussion lighters are somewhat more numerous and older, although marcasite also presents conservation problems related to its oxidation. The best examples are:

The techniques of producing friction fire consist in using the heating produced by the friction of two wooden elements. The ignition phenomenon can be decomposed in two steps:

This small ember can ignite sawdust fine fuel such as straw, dried grass, leaves, dry conifer needles or the tinder , provided a sufficient supply of oxygen by Oral or manual ventilation. Once the primary fuel is burnt, it is possible to use small wood to obtain a large flame. The big wood will be added later, the main thing being to make the fire grow gradually, without exhausting it right away on a log that will catch fire with difficulty.

The friction can be exercised in several ways: sawing of a plank fitted with another plank or rod, oblique longitudinal friction of a rod on a grooved base, gyrating (drilling a plank made by a rod cut in point). In the latter case, it is possible to facilitate the rotation movement by using a “firewall” or “fire bow”. The movable element must be able to come and go quickly without leaving the cavity in the fixed wood. The arc-à-feu facilitates the obtaining of the fire. It was used in Native Americans , in ancient Egypt, in Australia … The principle of the bow was also used to make tools to be drilled in pre-industrial context.

Contrary to a widely held belief, the relative hardness of the two wooden elements is not important: on the other hand, at least one of the two elements involved must be a wood rich in long microscopic fibers producing a ventilated sawdust. These woods are said to be self-igniting. The hardness only intervenes secondarily, in the ease of producing the sawdust. Softwoods (hardness = 3 on average) will therefore be preferred to hardwoods: in Europe, the most effective are ivy , bay leaf and linden , but poplar or hazelnut can also be used 6  ; Also used, the horse chestnut , the bamboo , the orchard of Canada

The carving of the chimney is of paramount importance in the lighting of sawdust. Thus, the chimney called “Ossaloise” because used in the time of Gaston de Foix in his country, proves to be the most effective even with hardwoods like oak. This chimney is asymmetric “N” shaped. The historical research of the musician Lades Neffous made it possible to find this knowledge in the local archives of Béarn. The Cathars had perpetuated this tradition of fire by friction, but the religious stakes of the time had caused the disappearance of this technique.

In order to have a spark, it is necessary to strike tangentially an iron sulphide, such as marcasite (or pyrite ), 7with a hard stone (such as flint , quartz , granite or even another Iron sulphide nodule). The iron-sulphide-torn particles immediately oxidize in the air (exothermic oxidation reaction) generating particulate, incandescent sparks, the duration of combustion of which is long enough to be recoverable on a fine combustible material 8 .

Sparks obtained in this manner must be immediately received on a fuel such as charred laundry, dried and fine previously carbonized leaves, flammable fungi such as tinder or certain plant marks. This primary fuel, which transforms the spark received into embers, is called initiator. The initiator must then be placed in a fine plant material (hay, conifer needles …) to generate a flame after ventilation.

Contrary to a widespread idea, the shock of two flints does not allow a fire to be ignited because the sparks produced are only a simple emission of light due to the stress exerted on the quartz micro crystals that form the flint. It is a phenomenon called triboluminescence , which can also be observed by rubbing two pieces of sugar in the dark. The flint is formed of silica, which is a silicon oxide and therefore can not react chemically with the oxygen in the air. As there is no incandescent material torn off, no fire can be ignited thus in spite of the fleeting sparks obtained.

A concave mirror of the size of the palm of a hand allows to concentrate the sunlight at a point ( the focal point of the image ) and to produce there sufficient heat to ignite a fuel if it is placed at this precise point and so light a fire 9 . Totally functional gadgets to light cigarettes in the summer are selling for a few euros 10 . The use of a magnifying glass of the same size is also possible.

Some survivalists propose to apply the principle of converging mirror using an aluminum can which would have polished base with an abrasive (cloth or chocolate or toothpaste 11 ). Once a good mirror is available, it is still necessary to determine the point of convergence . A sheet of paper makes it easy to find it by placing it above the base of the can facing the sun and moving it so as to obtain the smallest luminous disc possible. Once found, it is sufficient to place there a flammable material, like a twig, which should then ignite very quickly. It is then possible to transmit the flame to larger fuels, by gently blowing to activate the combustion .

The use of arcing mirrors is attributed to Archimedes , who would have used them to burn the Roman ships attacking Syracuse . Numerous historical and experimental elements make it possible to consider this episode as a myth ( see The Siege of Syracuse and the Archimedes’ Mirrors ).

The solar ovens modern such as the Odeillo solar furnace or solar power Themis in Font-Romeu operate on the principle of the concentration of sunlight.

The pneumatic lighter or lighter is a fire ignition device that is based on the increase in temperature that occurs when a gas is rapidly compressed. It is this same phenomenon that allows the ignition of the mixture of diesel fuel in a diesel engine. The pneumatic lighter consists of a cylindrical body in which can slide a piston filled with tinder at its end. When the piston is struck, the air is compressed, its temperature rises, and the tinder flames.

The invention of matches current date of the xix th  century , but the word “match” dates from around the year 1200 . He then pointed to a small log intended to set fire to.

From the xvi th  century , a match is a small stick coated sulfur at one end. This makes it possible to produce a flame quickly with a small piece of glowing tinder. Thus, current matches that achieve a flame in a single gesture were called “chemical matches” in xix th  century when they appeared, in contrast with sulfur matches that existed long ago.

The lighter is an ancestor of the lighter . The latter contains a fuel reserve in the form of gas, which allows a flame to be maintained once sparks have been supplied by the lighter stone .

An electric arc may be used to ignite a flammable gas, such as town gas or the oxy – acetylene mixture used for torches . This technique is commonly used to light so-called electronic gas lighters or lighters, the electric arc being produced by a piezoelectric crystal .

An electrical current in a resistor can produce a temperature sufficient to ignite directly or indirectly a fire. The most common application of this process is the cigarette lighter . In the same way, it is possible to light a barbecue with a thermal stripper . This method is also used to ignite pyrotechnic processes, some of which require temperatures higher than a normal flame to start.

Some oxidation reactions at room temperature cause a release of heat sufficient to ignite. Among the most classic, there is the oxidation of sodium by water, or the oxidation of glycerine by potassium permanganate. This latter reaction can also give higher temperatures than a flame without additional oxygen.