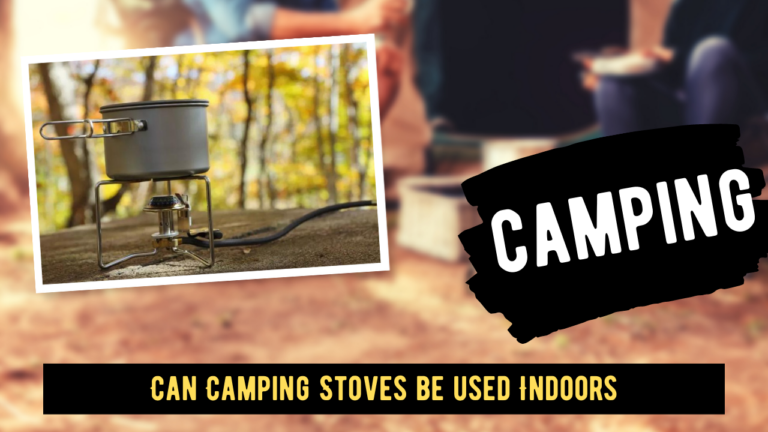 Camping stoves are usually designed for outdoor use, but some models can be used indoors with precautions.

A camping stove is almost indispensable for life in the wilderness.

It’s lighter than an open fire grill, more reliable and you don’t have to start a large open fire.

A camping stove can also be used indoors under certain conditions.

We will now talk about when and how you can safely use your camping stove indoors, both in an apartment and in a tent.

Can Camping Stoves be used Indoors ?

Before we get to the dangers and alternatives, I would first like to answer the question of whether camping stoves can also be used indoors.

Camping stoves can be used indoors as long as the stove is used with care and has adequate ventilation. Alcohol, white gas and propane gas stoves are recommended.

Caution: Indoor operation can be dangerous under the best of conditions, so let me make this very clear: don’t do it unless you have camping stove experience and are unfamiliar with your own stove.

Note: Take a look at the top list of the most popular products that preppertidbits.com visitors regularly buy. Status as of (February 6, 2023)

Believe it or not, fire is one of the most common hazards.

Lighting a house with a camp stove might be difficult, but it’s easier with tents.

Modern tents use a highly flammable material to waterproof the tent.

If you set fire to a tent, it can become a trap in minutes due to the high rate of flame combustion.

The more insidious danger, however, comes from carbon monoxide (CO). CO is an invisible, odorless gas that binds to the hemoglobin in your blood even better than oxygen.

As a result, it can build up in your blood, displacing oxygen from your body and causing dizziness and confusion.

If you stay in an environment containing CO, you can eventually pass out and die.

Carbon monoxide is produced when fuels containing carbon are burned. However, it is a by-product of incomplete combustion, meaning more efficient fires produce less CO than “dirtier” fires.

As a result, some stoves are safer for indoor use while other, less efficient stoves are not.

A charcoal burner, for example, should under no circumstances be used indoors.

They generate far too much CO. For the same reason, kerosene stoves should never be used in closed rooms.

Alcohol, white gas, and propane stoves, on the other hand, are safe to use in a ventilated space. Good examples of ventilated spaces are under a working furnace duct, in a fireplace, or in a room with open windows.

Finally, white gas and propane stoves can leak, allowing gas to build up in an enclosed space. This can lead to a flash of fire or even an explosion.

So make sure the openings are sealed as tightly as possible.

And never leave your stove running unattended. If it accidentally goes out, the room or tent can fill up with gas rapidly.

If you want to cook in a tent, the risk of fire and CO is significantly higher.

Ultimately, there is no reason to justify the danger of running a furnace in such a small combustible space.

The only exception are mountaineers who may be literally hanging on the edge of a cliff. But in this case we are talking about very experienced campers.

But that doesn’t mean you have to cook in the rain. The vestibules (storage areas that are not in the inner tent) of some large tents offer a good compromise.

You can protect yourself from the elements and escape quickly if the worst comes to the worst. And with the flap fully open, you also have enough ventilation for safety.

Another problem is cooking in bear country. Bears have an extremely keen sense of smell and are even attracted to the residual odor that lingers hours after cooking. Cooking in your tent can be a rude awakening.

What Are The Disadvantages Of Using A Camping Stove Indoors?

Camping stoves are not designed for indoor use, so using them indoors is not recommended. There are two main reasons for this: safety and efficiency.

Camping stoves have open flames, so they cannot be used in an area that is not well ventilated or where there is a risk of carbon monoxide poisoning.

The second reason why camping stoves should not be used indoors is that they are not efficient enough to heat the interior.

If you plan to use your camp stove indoors, there are alternative stoves that are much safer than propane or charcoal. Here are a few of the most common:

These stoves burn very cleanly and because they use a liquid fuel there is no risk of gas leakage. However, you’ll need to let the stove cool down before refilling, which can be annoying if you run out of fuel while you’re in the middle of preparing a meal. The Esbit company makes a nice little five piece set with a brass burner.

Canned fuel paste is a condensed alcohol gel. Simply remove the lid, light the paste with a match or lighter, and you’re ready to cook. But be careful in well-lit environments: this fuel has an almost transparent flame that can be nearly invisible on a sunny day. All you need is this can right here.

MREs are standard army rations and, as the name suggests, are completely ready-to-eat. They may not be as tasty as a home-cooked meal, but they’re easy to take with you on the go and they’ll last for years as a home emergency supply.

In conclusion, camping stoves can be used indoors with proper caution and safety measures. However, it is always recommended to use certified indoor stoves that are designed for indoor use. Make sure to ensure proper ventilation and never leave your stove unattended. With the right equipment and safety practices, you can enjoy the outdoors indoors.