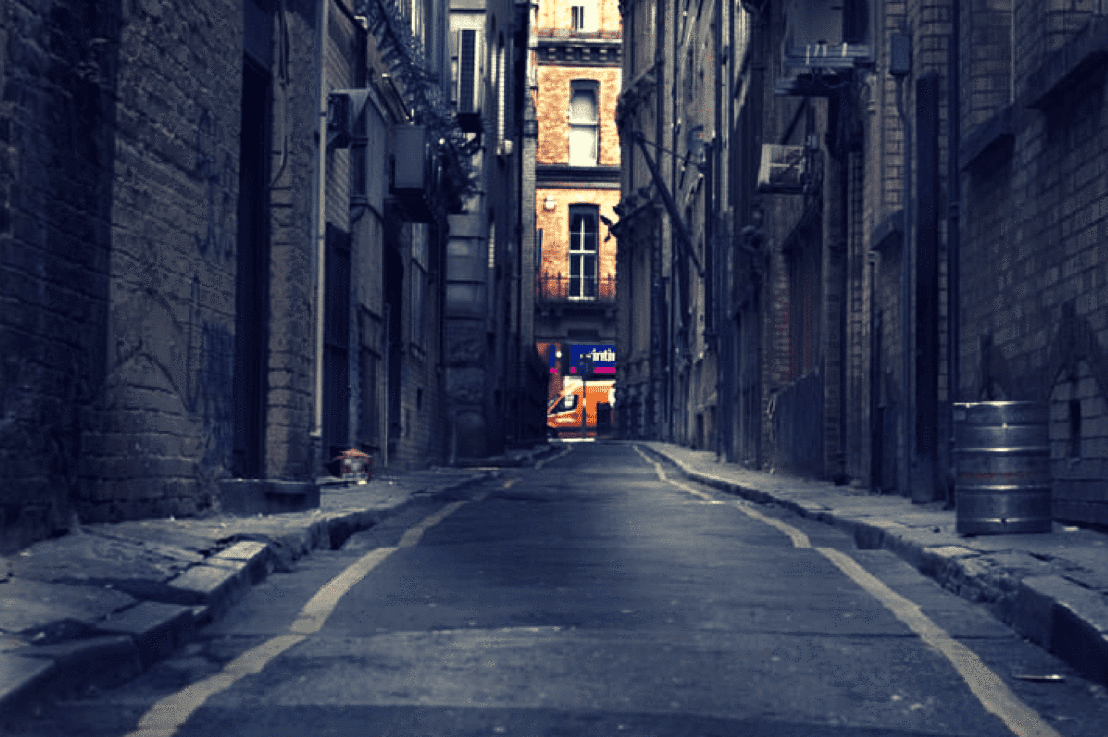 If you live in a big city or even a suburb, then you have surely been told many times that in the event of chaos, the first thing to do is to get out.

This is usually the first advice that survivalist apprentices receive from their elders, before spreading it in their turn as an obvious fact.

Today we will look into this false evidence in greater detail and see why, despite popular belief, leaving the city would probably be the worst thing you could do in a situation of chaos …

This is an hypothesis that seems to be untouched by any discussion in the survivalistic milieu: large cities will be a cloak of disorder and chaos, a veritable virtual time bomb ready to destroy all those who live there.

The strategy recommended in authorized circles would be that each shoulder his bag of evacuation, and flees with arms and luggage towards the incontestable nirvana that represents the wilderness. As if in a certain way, everything was going to happen once away from the frightening city …

One could wonder about the real causes of such a craze for the green to the detriment of the city. It seems that the preppers retained only the arguments in favor of the first, and I personally think that ” They are more a matter of myth than of true reflection.”

Unless this attraction is the expression of repressed frustrations that can not fail to be experienced by the city-dweller deprived of the song of the birds and the favors of the farmer … Here are the 10 best reasons why you would have in my opinion more than Chances of finding you safe where you are after a collapse of the system … even if it’s in a big city:

If you are a prepper, you will surely have stocks of food and supplies. Let’s be realistic, how much of all this could you carry in your vehicle or your backpack? On the other hand, why make so many preparations if it is to leave them behind, at home, just when you need it most?

The latest European conflicts have clearly demonstrated that rural areas are actually much more dangerous than cities.

There were two main reasons for this: (1) Lack of population, resulting in difficulty in regrouping in defense communities, and (2) Lack of commercial relations between people, thus limiting the renewal of stocks .

The result is that they simply could not defend themselves against their attackers. In this regard, it is also clear that crimes in rural areas are generally more violent than those committed in the city.

Difficult to conceive? I grant you. Yet all this is evidence demonstrated by the reality on the ground, It would be particularly irresponsible not to take into account. There is no question of denying the opportunity of ADBs as a whole, but it must also be acknowledged that they present certain risks, which are not as minimal as the books on survivalism generally claim.

3 / The place of destination

Where do you go? It’s nice to have planned to leave the city, but do you have at least one place to go? To leave to settle in the middle of the forest is a more than stupid idea, of which we have already spoken. Unless you have a rural location ready to welcome you and perfectly fitted out, all you are going to do is give up a comfortable shelter to bury you and your family in the middle of nowhere.

4 / The union is strength

It does not matter if you are Rambo in person and think you can defend your position with a hand tied behind your back. In terms of security, it is the number that makes the difference. In a real chaos scenario marked by the absence of rules of law, you can be sure that people who have nothing will band together to take supplies from others by force. This has been time and time again verified during natural disasters around the world.

The only chance to guard against it is to form a community of people with the same intentions and who are willing to help each other . Is it more likely that you find this community among your current neighbors, Or among united groups of farmers who do not know you and see you for the first time?

Personally, I would rather bet on the first … The conflicts that I mentioned also showed that the close neighbors living in town spontaneously regrouped to share resources, defend themselves, and even to hire private bodyguards if necessary By putting their resources in common . This solution seems to me much safer for a family and its leader, rather than being isolated in the green or in the company of perfect strangers in a corner of the country.

5 / The danger of getting around

Leaving the place where you live, whether it’s the city or the countryside, is one of the biggest security challenges you could face. Many in the midst of survival think of evacuation as a solution, but this is far from the case. In fact, this only increases the risks. Of course, if you have an ADB with a group of survivors waiting for you (and an armed militia to defend it), the problem is different. Once you are there, you may actually find yourself better or safer than at your starting place. But you still have to be able to do it …

During all the time that your journey will last, you will be completely exposed, with a limited amount of resources. At this stage, You will always be a walking wallet / meatman for any malevolent individual who will cross your path. Everything you could look for in a remote location – weapons, ammunition, equipment – are already in your neighborhood and close at hand!

Personally, I would not see the interest of undertaking a long and perilous journey to find myself at any place with fewer people.

6 / Knowledge of the environment

Do you know the area where you plan to settle? If you are like most city rats, you probably know your neighborhood as the bottom of your pocket. So good that you could venture there with your eyes closed. You know where to find potential fountains, grocery stores, potential sources of supply, and wherever you may be hiding outside your home. You will not know all of this if you are going to an unknown place . Knowledge of one’s environment is important, even more so in a situation of chaos. Quantities of battles were won by invaded peoples thanks to their control of the terrain, in spite of adverse forces far superior in number or in equipment.

The tremendous advantage of staying on the spot is that it allows you to prepare right now for where you live for future chaos. Trying to strengthen a position during a crisis is much more difficult than in peacetime. Therefore, if the chaos comes to settle, you will be ready to face it.

A real apocalypse of the deluge style to the Noah is not the hypothesis that I would retain first. Even in the event of a serious event, the idea that the organization of society, government, services and communications are NEVER restored is practically impossible. The order will inevitably come back and little by little, life will return to a certain normality, even with a much lower level of technicality.

Which places will “get” the fastest? Experience has shown that cities recover more quickly after wars or natural disasters. If your goal is to quickly forget the tough times, then you will have to wait more if you live in the countryside (assuming we were still alive, of course …)

Most survivalists justify a survival base in the countryside on the grounds that the latter offers much more resources than the city. This may be true, although I think the idea is very questionable. But even if this is true, it does not mean that these resources will be yours . Do not think you’re going to take the tangent in the green, and start plowing a farmer’s field, fishing and hunting on his land in peace.

The people of the country defend what belongs to them; They are proud, possess weapons, know their domain perfectly and are accustomed to defend it. It is quite unreasonable to think that just because the campaign has resources, you will be able to get hold of it.

The idea of ​​evacuation is quite valid in certain situations, and we shall have occasion to return to it. If your habitat has been permanently compromised, if it is no longer secure, or the risk of staying there is greater than that of leaving it, then you must leave. I just hope you have a plan in place for that eventuality …

Now let’s clear it up. The reasons I have just stated do not mean that a residence in a city is more appropriate in the event of a collapse of the system than a base in the countryside with its own land and resources. If you are at the stage of choosing a place in the idea of ​​making it a retreat for tough times, then choose it outside a big city, Or at least in an environment that is somewhere between the very rural area and the village or small town.

However, the systems I have just spoken need time to be put in place. You can not choose a city lifestyle, and when a disaster occurs, you suddenly improvise gentleman farmer by saying, “Here, Campaign would not be bad, let’s see what happens there … “. Certainly not. When the lights go out you will have to do with what you have where you are, which is the main subject of this article.

The important point to remember when evacuating from a particular city or situation is that ALL is related to this situation . It is good to draw plans on the comet and prepare, but as the saying goes: “The best plan never comes in contact with the enemy.” We can try to plan as much as we can, but we will never know what will happen when chaos strikes at our door.

Every disaster carries with it its share of specificities, and each person is different. We live in different places, with different families and communities. The plan that suits me best may not be the best for you, which makes endless the classic debate about the opportunity to evacuate.

Staying where one is is almost always the best solution, which does not mean that it can not change during a situation of chaos. Plan to stay where you are , set up this place, and stand ready to evacuate if necessary. But beyond all that has been said, Stay conscious and do not be led by boat by the commercial mode of the “Bug-Out-Bag”.

My goal is not to convince you to stay in town, by listing its possible advantages in relation to the campaign. Certainly not. But rather to invite you to go beyond appearances, or ideas commonly accepted in the milieu of survivalism. In general, it is the purpose of this blog, through its various articles.

The notion of evacuation should occupy only a secondary place in the debate. Being a prepper means above all being autonomous, even for those who live in a large city. If so, set up your own urban version of water and food supply, and if chaos strikes one day at your door.